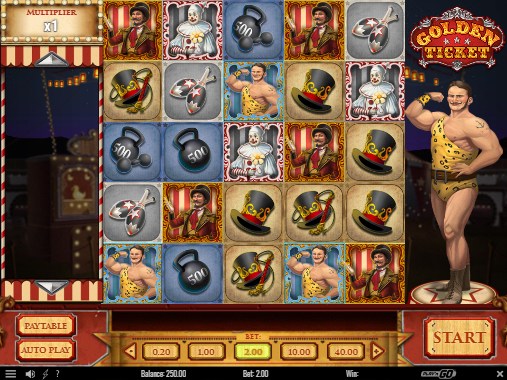 What is Golden Ticket?

Golden Ticket is an epic grid slot casino game, that uses an old school circus theme to give it a unique look and magical feel similar to Twisted Circus by Microgaming. It was created by industry leading developer Play N Go. The game screen uses a 5 reel and 5 line grid, filled with symbols and pictures of a bygone era of big top entertainment. The symbols keep in line with the circus feel and include things like top hats, oversized weights, a ringmaster, juggling instruments, strongmen, clowns and of course the sought after Golden Ticket itself. It is available to play free online, but for more fun (and money making opportunities) it is available at many online casinos, as well as in traditional bricks and mortar casinos. Play N Go create some of the most entertaining games in the business, on a level similar to Microgaming, and Golden Ticket is no exception. The game feels slick and well designed, the animations are good and the graphics are crisp and clear. Play N Go have used similar software before on the casino game Energoonz, which uses cartoon alien style graphics in place of the circus theme.

How is it played?

The basic object of the game is to create a win which occurs when there is a horizontal or vertical line of 3 or more symbols. When a player wins, then the 3 or more symbols that made up the line disappear and the rest of the symbols that remain fall into the gaps. This can then lead to consecutive wins. Cascading wins are helped by the Golden Ticket. If a player hits a gold ticket, it then replaces the symbol and the rest then disappear. The Golden Ticket then becomes wild and contributes greatly to consecutive wins. On the left hand side of the screen the players wins are displayed as well as any multipliers. If a player manages to clear the entire screen they win 200 times the amount they wagered.

Another feature of the game is the bonus round. When a player makes a spin the letters ‘BONUS’ light up on columns behind the symbols. If one of these columns is cleared while a symbol cascade is running then the bonus round becomes activated. Then the screen changes into a shooting gallery where bonuses can be won.

Here are several tips that may help maximise your winnings on Golden Ticket. Due to the volatility rating of the game and the bankroll, some have recommended bets of up to 20 coins to provide the most optimal return. Bonuses come as a natural part of the game, so the better you play and enjoy the game then the more bonuses will come your way. Don’t forget to stick to your limits – if you have won big, or lost your set limit try and end the game.