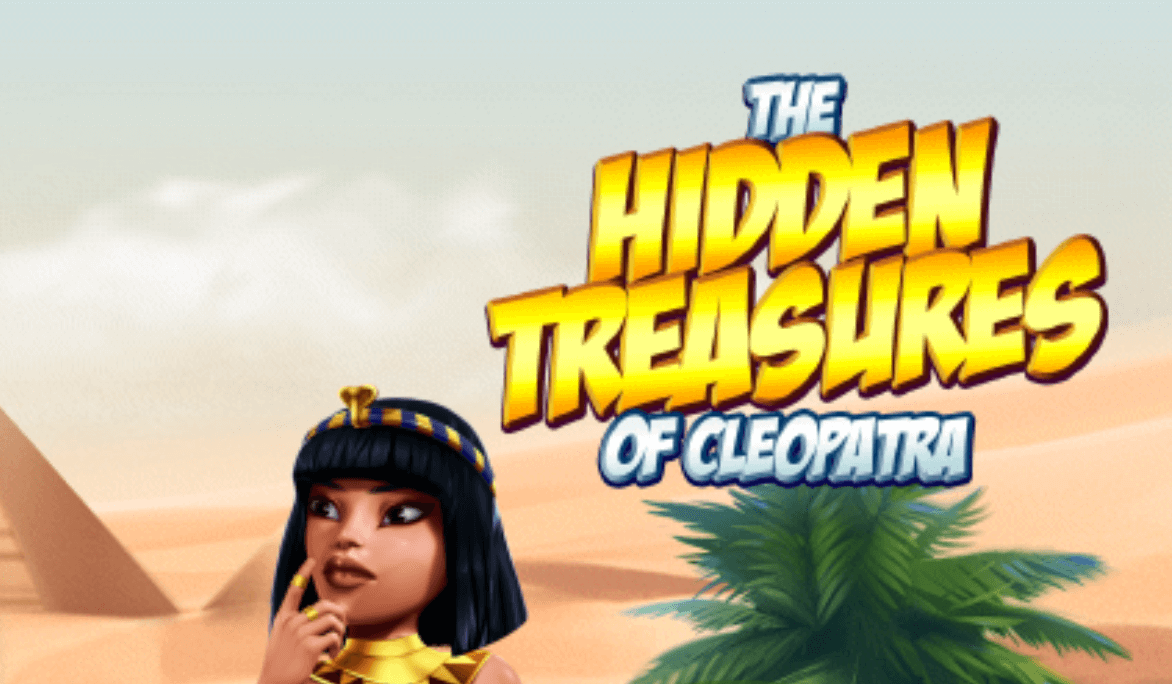 Follow in the footsteps of the archaeologist-explorer and come eye to eye with the riches of ancient Egypt in the Hidden Treasures of Cleopatra slot game.

Hidden treasures of Cleopatra is a fun slot with an old-school 3×3 reels structure. The grid can expand, however, to a 4×4 and 5×5 structure increasing your win potential. On this cartoon-like slot you follow an upbeat explorer- archaeologist who finds himself in the middle of the Sahara Desert in Egypt. He is in search of the hidden treasures of the land of the pharaos and on his search he comes eye to eye with one of the most well-known pharaohs of all: Queen Cleopatra. Share in the riches the explorer discovers on Hidden treasures of Cleopatra slot game.

Hidden treasures of Cleopatra is set in the desert with pyramids at the backdrop and a small stream coming from the fruitful river Nile is flowing on the forefront. Both the explorer and the title heroine appear on either side of the grid and as symbols on the reels. The slot has 27 Win Ways in the base game. This increases to 256 Ways to Win when the grid is expanded to 4×4. You have no less than 3125 Ways to Win when the reels have expanded to a 5×5 structure. The positions of the reels have been designed as rolls of papyrus and each roll spins individually, rather than that the complete reel spins. This gives a fun effect of depth on the reels. In addition to images of the explorer and cleopatra, the latter being the highest-paying symbol, you find gemstones in different shapes and colours and holy animals on the reels. The animals deemed holy by the ancient Egyptians that make their appearance on the reels are the snake, the Anubis and the cat. When it comes to cats, you play images of two cat statues both with shining ankh signs around their neck. When you play at least 3 Free Spins symbols on the reels in one spin you are awarded free rounds. A 3 and 4-of-a-kind win respectively let the reels expand from a 3×3 to a 4×4 grid or 5×5 grid for one spin. If you don’t hit another 3 or 4-of-a-kind win in that one spin, the grid returns to a 3×3 structure.

Welcome to a heavenly bliss of divine games collection, prosperous bonuses, free spins, and a seamless, player-friendly gaming experience at Casinogods. It is the only casino that has dared to apply a Greek-gods theme so perfectly.

Review
Visit Website!Visit Website!
T&Cs apply
1st Deposit, new players only. You may only claim one Welcome Offer (Welcome Package or Live Casino Bonus). Once you have claimed one, you will not be eligible for the other. To be eligible to claim the New Player Welcome Bonuses, players must deposit a minimum of €10 in one instance, for each bonus. Players can only use the Bonus Codes from the New Player Welcome Package once. Players need to wager the first four Welcome bonuses 40x.

30 Free Spins will be instantly credited upon qualifying deposits. The remainder will be credited at the rate of 30 per day for 9 days on pre-selected games. Casino Gods reserves the right to change the pre-selected Free Spins game selection at any time, at its sole discretion.

The Wild symbol can appear on reels 2 and 4. It fulfils its usual symbol substituting functions and can replace any other symbol with exception of the Free Spins symbol.

This feature is triggered in Free Spins mode when you play no Free Spin symbols at all in any given round. When the Bonus Game is activated you spin a dual wheel compass. The first wheel of the compass has 3 green segments and one red segment. When you hit the red segment the Bonus Round ends immediately. When you end up in a green segment it triggers the spinning of the second compass wheel. The direction indicated on the second wheel determines the cursor movements on the grid. When the cursor moves into a new grid space you receive a pay out equivalent to 5 of a kind of the symbol you have landed on. The Bonus game ends when you land on a red segment of the compass wheel or you end op in a position outside the grid or on a position you have already landed on in previous turns.

Playzee Mobile Casiino focuses on making the gaming experience as fun as possible for its players. In addition to the €1500 bonus, you are eligible for the Zee Points and many more daily gaming events!

Review
Visit Website!Visit Website!
T&Cs apply
1st Deposit Bonus with a minimum deposit of €20. Wagering requirements: 35x (bonus + deposit) Maximal bet: €5 or 19% of starting bonus value (lower value applies).
You also receive additional 10 free spins daily for 10 days following your deposit. The maximum withdrawal from free spins is capped at 50$/C$/£/€ (or currency equivalent.)
500 loyalty points as a part of bonus.
Deposits made via Neteller and Skrill are not valid for this promotion. 18+ Full Bonus T&C's apply
Read all T&Cs