Harness the wisdom of the Golden Owl! The Golden Owl of Athena is a new slots game from BetSoft, available to play in any of the best online casinos. The game is compatible with desktop PCs (Windows and OSX), and smartphones (Android, iOS, tablets). With an RTP of 95.05% and a hefty max payout of £562,200, this game offers good steady gameplay. It remains interesting and entertaining, and regular small wins interspersed with the odd larger one.

The game features five reels and ten fixed paylines over a classic 3×5 grid, with a bet size of between £0.10 and £10 per turn. This makes the game ideal for those players with limited budgets – high rollers may want to pass on this one. The volatility is somewhere in the middle with fairly regular payouts thanks to the high value of the Owl symbol, balanced against the many two-of-a-kind wins. 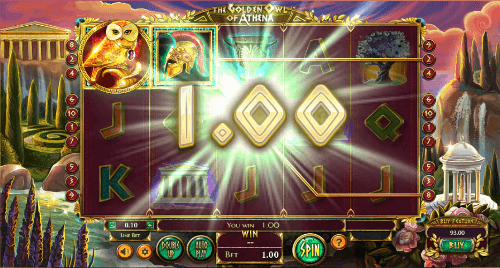 The game features three tiers of symbols as well as the owl: Athena, the Parthenon and the olive tree are the highest and will pay out 5,000 coins for five of a kind. The helmet, dagger and urn will pay out 750 coins, and the Jack to Ace symbols all pay 150 coins.

The owl itself is the one to really look out for. However, and is easy to spot when it shows up thanks to the hooting sound and the flash of gold that herald its appearance! Not only is it the wild symbol, it also gives scatter payouts and triggers the free spin feature.

The graphics are nice and colourful, harnessing lots of imagery from ancient Greece. The game also really leans in to the mythology side of things, with featured symbols associated with Athena such as the Parthenon and her dagger, not to mention the Owl of Wisdom itself.

The Golden Owl of Athena will trigger a number of free spins that depends on how many owls you get. Three owls award eight spins, four owls award twelve, and five owls award the maximum of twenty. Once the spins are awarded, the game chooses a symbol at random as a special expanding symbol. When it shows up it will boost your wins.

What makes this game unusual is the “Buy Feature” button. If you don’t want to wait for the Golden Owl to trigger free turns, you can buy them using the game’s coins. This can be a real game booster if you have the bankroll to support it, as the free spin mode is much more exciting than the regular game.

The Golden Owl of Athena is fairly customisable, featuring adjustable settings for sound effects and music, and a turbo mode as well as Auto Play and Max Bet features. It also has a Double Up mode – once you’ve made a winning spin, choose to make an offer of half or all your winnings. Then flip a coin for a 50-50 chance to double your money.

Play The Golden Owl of Athena slot on these online casinos!

MrGreen is one of the most popular casino brands on the market. It offers a large range of slot games as well table games.

The mansion is a mysterious looking casino, with a theme that creates an aura of a haunted, wealthy estate.

Launched in 2012, LeoVegas is an extremely popular gambling site that has won numerous awards for its incredibly high level of quality.
Review
Visit Website!Visit Website!
T&Cs apply
20 Free Spins on signup - no deposit needed Significant terms: New eligible players only. Select Casino offer on sign-up. Spins must be claimed on ‘’My Offers’’ page within 14 days of sign-up. Spins for Book of Dead game only and have a £0.10 value each; expire 7 days from claim. 35x wagering on eligible slots before winnings are converted to cash. Play Responsibly. 18+ begambleaware.org

Betsson casino is without a doubt one, if not the one, leaders within the online casino. No other casino brand offers this large range of slots, table games together with massive promotions. With Betsson - you can't go wrong!


Review
Visit Website!Visit Website!
T&Cs apply
18 +. 1st Deposit Bonus for new players only. If you're a new player a minimum deposit of £10 is required.
Read all T&Cs