Everything You Need to Know About Ultimate X Video Poker 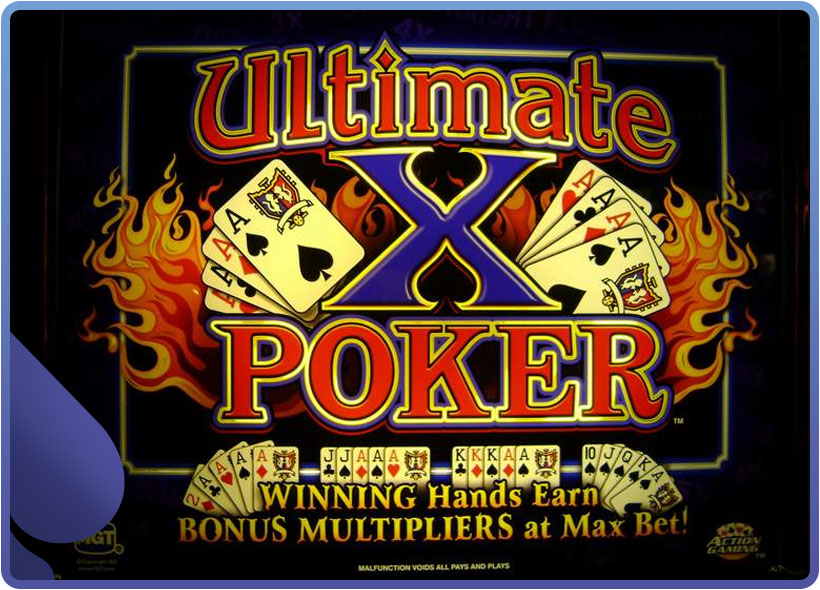 This high volatile game that can make your balance drop or skyrocket in a short period of time, is actually not a Video Poker version of its own. Ultimate X is a feature that can be activated in certain Video Pokers that are created by IGT, such as Jacks or Better, Bonus Poker, Deuces Wild, Joker Poker and Double Double Bonus Poker. Doing so the payouts of your hands can be multiplied by up to 12 times.

In the following article we will tell you more about this as we thoroughly explain how Ultimate X Video Poker is played. We will also take a brief look at how profits can be maximized by using the right strategy and by playing the right type of games.

You may also like: Everything You Need To Know About Double Double Bonus Poker

As mentioned in the introduction, Ultimate X is a feature that exists in certain Video Pokers. It’s activated by playing with the max bet of the game and paying an extra fee which is equal to this amount. If the fee isn’t paid, the Video Poker is just played normally without the feature active.

The beauty of the Ultimate X feature is that every winning hand has a win multiplier added to the next. So whenever you win a game round, the next has the potential to pay much more. How much more depends on the value of the hand that you win with as pairs, two pairs, straights, flushes, etc all have their own multiplier.

The number of hands that you play could also have an impact on the multiplier. Now what do we mean by this? Well, Ultimate X Video Poker is always played in 3, 5 or 10 hands simultaneously. These hands all come with their own deck of 52 cards.

To understand the game better, let’s have a look at a paytable from a Jacks or Better game with the Ultimate X feature included and follow this up with a couple of real examples.

Do note that the payouts in the above table are based on an original max bet of 5 credits. This is the bet amount required to play with the Ultimate X Feature. However, as activating the feature itself means paying an additional fee of 5 credits, we will actually be betting a total of 10 credits per hand. This means that getting a pair of jacks or better will not give us our money back unless a multiplier is added.

Now to the real examples.

To give you the best understanding of how the game is played, we will keep our examples as simple as possible by only playing 3 hands. Thus, we will bet a total of 30 credits per game round (10 credits per hand).

Playing Ultimate X Video Poker begins like any multi-hand Video Poker game. After a game round is initiated, the bottom hand is dealt 5 cards while the other hands remain hidden. The below is how it could like (note that ‘|X|’ represents unseen cards):

As is always the case with Video Pokers, you get to hold any cards you would like to from the initial deal. In our example holding the two aces is the obvious way to play. When cards are held, these will also be saved to the other two hands, which will look like this:

You are now able to draw new cards, which will replace all cards that aren’t held. In other words, all cards except for the two aces. Having received our new cards, it now looks like this:

As it turns out, we didn’t improve any of our three hands, but we got a pair on all of them. Checking the paytable above, we can see that a pair of jacks or better pays 5 credits. Thus, we won a total of 15 credits from our three hands and ended up with a loss of 15 as our total bet was 30 credits.

So far, the game has been played like any multi-hand Video Poker. However, now comes the interesting part with the Ultimate X feature. On our next hand all payouts from all three hands will be multiplied by a factor of 2. This is because winning with a pair adds a x2 multiplier, which can be seen in the paytable.

Let us illustrate this by initiating another game round where we once again bet 30 credits.

This time we were dealt a two pair, which is awesome as we’re already guaranteed a profit. This normally pays 10 credits, but as an x2 multiplier is active, each two pair will earn us 20. We will obviously hold the two kings and two 5’s to draw for a full house:

What’s even better though is that the multipliers will give us massive potential on the next hand. A two pair comes with an x3 multiplier, while a full house comes with an x12! Now let’s have a look at how it plays out:

Holy Moly! We got ourselves a straight flush draw which we certainly must go for. We’re holding everything but the 10 of clubs:

Did we hit the big hand? Let’s find out!

No straight flush, but this is definitely not bad. Our first hand was a blank and our second only a pair, but the third one hit nicely with the x12 multiplier. So what’s our total win? The pair pays 5 credits x2 (total of 10) and the flush 30 credits x12 (total of 360). Pretty sweet!

It’s unfortunately very rare. Here at casinowebsites.com we have rated and reviewed a heap of high quality video poker casinos and we have never come across a game that supports the feature. To be perfectly honest, we don’t know if it exists at all online or if it can only be played at brick and mortar casinos.

It’s no secret that Video Pokers can be played in a better or worse way. Depending on the cards that you hold and the type of hands that you decide to go for when drawing, your RTP (theoretical return to player) will be affected. With most Video Pokers there’s an optimal way of playing that will guarantee the maximum RTP of the game. This RTP can often be as high as 99% or even higher.

In Ultimate X Poker the optimal strategy is affected by the multipliers that are in play and so far no one has done the math and created a cheat sheet for it. However, it is said that using cheat sheets that already exist for Jacks or Better, Bonus Poker, Joker Poker, Deuces Wild and other Video Pokers will be very close to the optimal play in Ultimate X as well.

So if you’re playing the Ultimate X feature in a Jacks or Better machine, just follow the optimal strategy for Jacks and Better and this will be a really good strategy for Ultimate X Poker too.

If you want to make the most money out of your Ultimate X Poker experience, playing optimally with a strategy is only part of the answer. What’s just as important is picking the right game as RTP values can vary widely; anything from 96.30% – 99.80%. This will make a huge difference on your long term results.

To help you out finding the perfect and most profitable game to play, we have listed all Video Pokers created by IGT that support the Ultimate X feature and mentioned their RTPs. We have also highlighted all games that have an RTP of 99% or higher.

Note that the values mentioned after the game names, such as 9/5/4, refer to payouts. Many types of Video Pokers exist in different variations where some of the payouts are slightly different. For instance, Jacks or Better 8/6 refers to a full house paying 8 times your bet amount and a flush paying 6 times, while 8/5 means that the flush is only paying 5 times the bet.

In Ultimate X Pokers created by IGT the maximum win is 48,000 credits per hand, which is equal to 4,800 times your bet amount. To get this win, you first have to make a winning hand with a full house to get an x12 multiplier on the next. After this, you have to be lucky enough to hit a royal flush so that this payout is multiplied by 12.

Is the volatility higher with the Ultimate X feature active?

Yes, a lot higher. You’re paying twice as much on every game round without the payouts changing. You’re paying for multipliers that may increase your winnings, but this will not happen as often as you think. And most of the time when it’s happening the win multipliers will be low. This means that your balance is much more likely to drop quicker with the Ultimate X feature active. However, the feature also allows you to win way more than you normally would if you do get a desired dose of lady luck.

Can I play Ultimate X Poker for free on an app?

You can indeed! There is an Ultimate X Poker app available in the Google play store as well as the iOS app store. It’s free to download and allows you to play the game for free with an unlimited amount of demo credits.

What’s the best secret to winning in Ultimate X Poker?

It’s not playing with a bonus and it’s not playing with a strategy or even playing the game with the highest RTP. These are all good ways to increase your chances of winning, but the best one is visiting brick and mortar casinos and check for Ultimate X machines that still have multipliers on them. People sometimes leave the machines without making full use of their active win multipliers. This is an added value that you can make use of by just placing a normal bet; a bet that doesn’t pay for the Ultimate X feature.