Everything You Need to Know About Double Double Bonus Poker 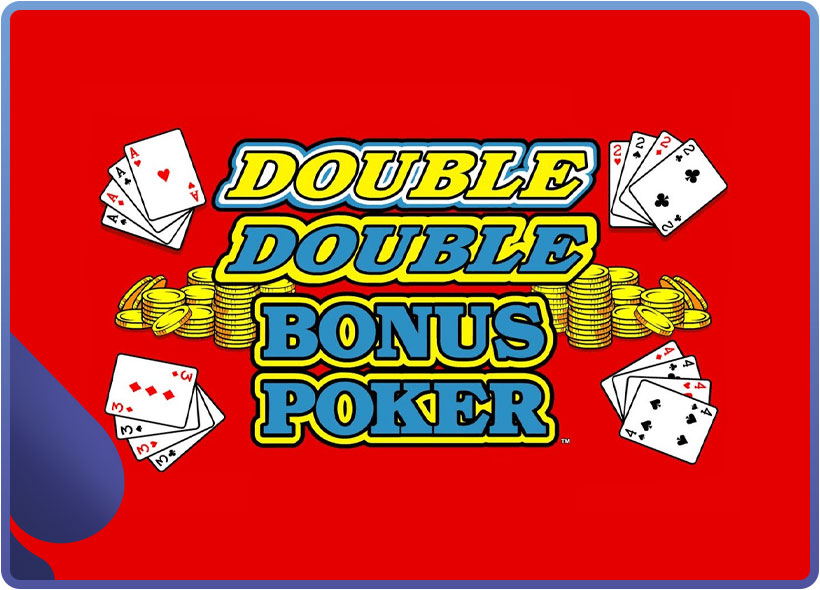 Video Pokers come in many different variations and while some players like to settle for the traditional Jacks or Better, others prefer the creativity of Deuces Wild and the extreme volatility in Ultimate X Poker. A ton of people also love Double Double Bonus Poker, which is a very similar game to Jacks or Better, but with a different paytable that make four of a kinds a lot more exciting.

So what does this paytable look like? Keep reading and you’ll find out as this is one of the things that we will present to you in the following article. We will explain how Double Double Bonus Poker is played and hand you a convenient cheat sheet that allows you to play the game perfectly with a maximum RTP.

You may also like: Everything You Need to Know About Ultimate X Video Poker

In terms of gameplay, Double Double Bonus Poker is not much different from other Video Pokers. You are dealt 5 cards from a 52-card deck and among these cards you are able to hold as many as you like while replacing the rest. Once a draw has been made, any winnings will be paid out depending on the hand that you have formed. A pair of jacks or better is required to receive a payout.

What’s a little bit different about Double Double Bonus Poker compared to some other variants of Video Poker, is that you are able to increase your winnings. There’s an optional gamble feature included in the game that allows you to double up any win a couple of times. This is not a unique feature though.

What’s truly unique about Double Double Bonus Poker is the paytable – so let’s have a look at it!

Note that all of the above payouts have been listed as a multiplier to the stake that you choose to play with. Also note that if you play with the highest coin level of the game, the royal flush will pay 1,000x and not 250x.

If you’re confused by the four different columns that say “10/6”, “9/6”, “9/5” and “8/5”, these are just different versions of Double Double Bonus Poker that have slightly different payouts and RTP. You can see that the payouts are differing for a flush and a full house, which is exactly what the numbers represent. For instance, “10/6” means a 10x win for a full house and a 6x win for a flush.

Now what’s really interesting about the paytable, which has made the game quite a popular one, are the four of a kinds. There are five different ways to get paid for four cards of the same value and they all pay a substantial amount – much more than they usually do.

Especially the four aces with a 2, 3 or 4 kicker is amazing as this actually pays more than a royal flush does (unless you’re playing at the highest coin level; it then pays 50% of a royal flush, which is still a lot). The kicker feature is also a unique thing about Double Double Bonus Poker that makes the game stand out.

In terms of hitting the four aces with the right kicker to get a 400x payout, this is way easier than hitting a royal flush. On average, it happens once every 16,000 hands compared to a royal flush that happens once in every 40,000 hands. You can clearly see why the game is loved by many video poker enthusiasts.

You can, but it’s definitely not a game that is commonly supported by gambling sites. If you’re looking to play it, your best bet would be checking out one of the top rated Video Poker casinos. Just don’t expect to find the version that comes with a 100.06% RTP. This is incredibly rare to find even at brick and mortar casinos – for obvious reasons. Should you play this Double Double Bonus Poker variant with an optimal strategy, you would beat the casino. Even though it’s marginal, you would be guaranteed a long term profit that you could potentially make a living off.

While a lot of luck is involved in Video Pokers, there is also a factor of skill that shouldn’t be neglected. The decisions that you make can either be good or bad for your long term chances of winning.

Luckily, playing perfectly isn’t very hard to do. There’s a cheat sheet created for Double Double Bonus Poker that tells you exactly how every hand should be played. It’s the ultimate strategy.

Below we have listed this cheat sheet, which is mainly developed for the 9/6 variant of Double Double Bonus Poker, allowing you to play with an RTP of 98.98%. It does, however, work well with the other payout versions of the game too.

To use the cheat sheet, you just have to locate the hand that you have been dealt which is listed the furthest up on the list. If you don’t understand how the sheet works at once – don’t worry. We have provided a couple of helpful examples beneath it.

Here Are Some Examples to Give You a Better Understanding

In this hand you have two cards to three different straights (A + Q, Q + 9 and 5 + 6), as well as Ace high. To know what the optimal play strategy would be, start from the top of the list (number 1) and move your way down to locate any information that’s matching your hand.

Doing this we find that “31. One high card: Ace” is the first matching option. We can also find two cards to a straight at number 30, but this says that we have to hold a Jack and Queen for it to be valid. Therefore, keeping the Ace and discarding all other cards is the correct way to play.

In this hand you have four cards to a flush, three cards to a royal flush and a pair of sevens. By checking the list, starting from the top, we find that number 18 is the first match; four cards to a flush. Thus, the best strategy in this Double Double Bonus Poker hand will be discarding the 7♥ and drawing to the flush.

As you can see in cheat sheet, three cards to a royal flush is listed twice above number 18. At position 14 as well as 16. However, the cards required for these positions to be valid aren’t the ones that we are holding. We have A♣, 10♣ and K♣ and only J, K and Q as well as 10, J and Q is mentioned.

Similarly, one pair is also listed twice above four cards to a flush; at number 12 and number 15. However, these pairs are Aces and Kings and we are only holding a pair of 7s.

Double Double Bonus Poker vs Jacks or Better – How Do the Two Compare?

As mentioned in the beginning of the article, Double Double Bonus Poker is a very similar game to Jacks and Better considering the fact that you need a pair of Jacks or better to get paid. So which of the two video pokers should you be playing? Let’s answer this question by making a comparison of the two games and comparing versions that are both “9/6”. In other words, versions that pay 9 times the stake for a full house and 6 times the stake for a flush.

The only reason that Double Double Bonus Poker is able to offer such huge payouts for its four of a kinds is that straights and more importantly two pairs pay less. Being initially dealt a two pair happens as often as once in 21 hands. And if we add drawing to the equation, hitting one happens much more frequently than that. The hand makes up for a lot of the RTP in Video Pokers and in Double Double Bonus Poker the two pair’s RTP is cut in half.

As the total RTP of both games are very similar, you are likely to win just about the same amount of money from both of them. In the long run that is. On a short term basis – like a single one hour session – it is much more likely to profit from Jacks or Better as the game is a lot less volatile. In Double Double Bonus Poker your balance will often drop quite quickly, which is occasionally compensated by four of a kinds that pay a substantial amount of money.

So to answer which of the two games you should be playing, you have to ask yourself the following question; do I want to risk my balance dropping quicker to potentially win more? If the answer is yes, then Double Double Bonus Poker is the game to go with.