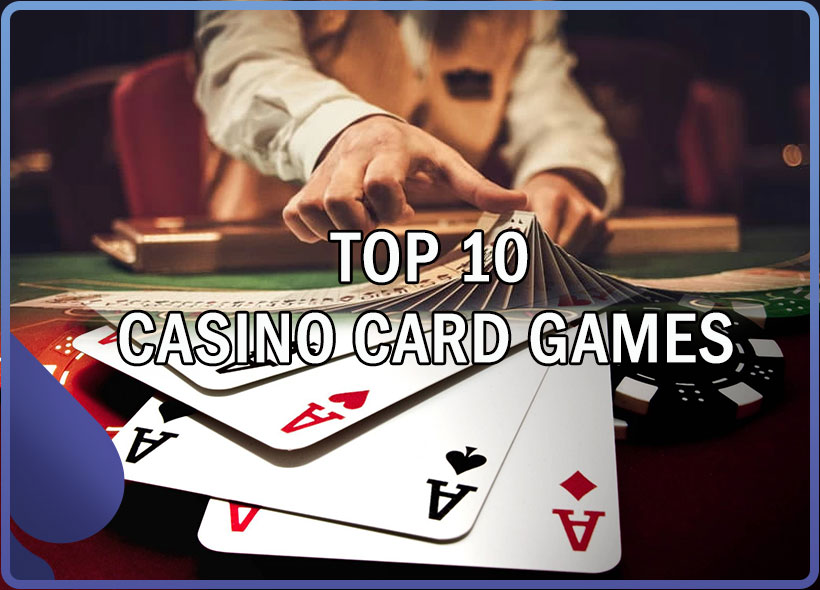 The history of card games goes way back to ancient 9th century China where people used to play with beans that at the time served as cards. Card games were probably first played in Europe somewhere in the 13th century, initially with handmade cards that were only intended for the rich and famous. Today, most casino card games are played with a traditional card deck, consisting of hearts, diamonds, spades and clubs.

Although the game has changed throughout its (very rich) history and new game of chances were launched, card games have never really lost popularity amongst gamblers and it’s fairly easy to see why. Card games are probably the oldest games of chance in the world, but they generally pay out better than other casino games such as slot machines. As there are innumerous card games available our team of casino experts decided to come up with a top 10 casino card games list, including some games you might haven’t thought of yet.

This popular variation of Jacks or Better video poker is actually one of the best online casino card games for newcomers. The rules of Jokers Wild are pretty much the same as in regular video poker (which also made it to the list), with the main difference that a joker card is added to the card deck and can be used as a substitute for other cards. To compensate the house for their lower house advantage, a pair of kings is the minimum hand required for players to win a payout.

In Oasis Poker both you and the dealer get five cards each, meaning you know what hand you’ve got straight from the get-go. Nevertheless, until the showdown, you will only see one card of the dealer’s hand, but you can improve your hand by replacing one or more of the cards with new cards from the deck. Depending on your hand strength, you can either raise or fold. Make sure you only replace cards if you’re only one card short to a Flush, Straight, Straight Flush or Royal Flush. Only fold if you have a card worth less than an Ace-King high.

Red Dog Poker is a rather easy card game that you will find in many online casinos nowadays and the good thing is that you can master the rules in a few minutes. Different from what its name might suggest, Red Dog Poker really has nothing to do with the regular poker game. Many casinos simply call the game Red Dog and the only thing that reminds of poker is the order of the cards: Ace is the highest card, Two the lowest. The main idea is that you bet and/or decide whether to double your bet or not, making it a darn easy casino card game to learn, one of the reasons why this game made it to our top casino card games list.

Baccarat hasn’t always been a favourite among average punters in Europe, but it is definitely considered one of the most popular games amongst high rollers. This has been the case for several decades now which has all got to do with the relatively low house advantage and the higher betting limits baccarat players seem to enjoy. Baccarat is an easy to learn game where your task is to guess which hand wins each round. The dealer and the player are both dealt a hand and determining the values is straightforward: just add up all the values of the cards and remove the first number. We would dare to say that baccarat is one of the games that give you the perfect combination of a casino game: high chances of winning and enough time to sit back and relax.

Stud is played against the house rather than against other players at the table and one of the main advantages of Carribean Stud Poker is the progressive jackpot it offers. This is actually one of the reasons why Carribean Stud Poker has gained a lot of popularity amongst players who are looking for a major jackpot, but still want to have fair chances of winning. Another advantage is that Stud is actually considered a very social game meaning you interact with other players. This seems enough reason to try out Carribean Stud instead of a jackpot slot.

Pai Gow Poker is a fun game for several reasons, with the main reason being the speed of its game play. Good to know as well: your maximum loss per hour is also significantly reduced because of frequent ties with the dealer. The idea behind this game is to form two seven-card poker hands, one two-card hand and one five-card hand. The game is played with a deck of 53 playing cards and the dealer is your main opponent, giving it a different touch when we compare it with regular poker games. Let’s say that Pai Gow… is different.

Video poker is based on 5-card draw poker, but in this case you won’t have to beat a dealer to win the game. Your hand will need to have the correct cards and this often starts with a payout for a pair of jacks or better up to a major payout for a Royal Flush. The house edge of video poker depends on the strategy of which cards you replace and the pay table on the game you are playing. In a positive video poker scenario (e.g. 9/6 Jacks or Better), the average house edge lies around 3%, but can be even lowered if you use a proper strategy.

As with casino hold’em, the dealer must first qualify, which in Three card poker basically means this needs to be done with a queen high or better. When the dealer has a worse hand, you only get paid the ante and not the bet. Just to give you an idea of your chances of winning: if you were to play every hand after placing the ante, you would be playing with a house edge of about 5%. Both your ante and bet are at risk against the dealer’s best hands, but if the dealer turns out to have a bad hand and doesn’t qualify, you will only be paid the ante.

As in many poker games, you start with an ante and place an extra bet if you’re satisfied with your cards. If the dealer doesn’t qualify with a pair of fours or higher, the bet stands. Please note that there are strategies for which hands to play or skip in Hold’em, so make sure you’re aware of all the possible scenarios this casino card game has to offer. Different from other table games, you can stay in the game with low cards and bluff your way to a win. Applying an optimal strategy your house edge can rise up to a max of 2% in Hold’em.

If you find yourself a blackjack variant that fits you well and use the optimal basic strategy, you can reduce the house edge to less than 0.4%, which is pretty impressive if you ask us. There are some video poker variants that come close, but in our opinion those games don’t give players the same fun elements as blackjack does. Even with less attractive blackjack variants the house edge is still only between 1% and 1.5%. Do make sure to work on your blackjack strategy though as a basic strategy means that you always make the right decision according to your hand. By doing so you can compare your two cards with one card from the dealer and next decide what to do. A proper strategy really makes a difference for a casino card game like blackjack, so make sure you make the most out of it.