Dive into a life of crime of infamous drug lord Pablo Escobar and go for all or nothing on branded slot game Narcos.

Narcos is inspired by and made in partnership with the makers of the hit Netflix series of the same name. Both the series and the slot revolve around the story of the infamous and notorious Colombian drug kingpin Pablo Escobar, whose fortune was worth billions. In his life of crime, rising to infamy with the help of several partners, Escobar had to deal with several opposing forces. These forces included rivalling drug lords and, of course, agents of the American Drug Enforcement Administration, DEA. On Narcos slot game you can dive into a life of crime Latin style, where the risks might be high, but so are the potential rewards.

Narcos slot has been inspired by the first season of the series set in the 1970s and 1980s. The slot makes use of drawings, rather than photo imagery, which adds to the retro feel of the slot. The scene of the slot game is set the outskirts of the Colombian city Medellin, where Escobar was based. Symbols on the reels include characters from the show, cars, planes, guns and other weaponry, piles of cash, and a pink flamingo. Narcos slot has a few features linked to a life of crime, that contribute to a fast-paced, action-packed slot game.

This feature can be triggered at random after every spin. Once activated, a speeding car appears from behind the reels and sparks a hail of bullets aimed at the higher-paying symbols to turn these into Wild symbols. When these Wild symbols become part of a winning combination, they turn into Walking Wilds.

Wild symbols appear in the base game when the Drive By feature is active and in Free Spins mode and they fulfil their usual symbol substituting functions.

Locked Up Bonus Round

This feature is activated when 3 or more symbols of Escobar himself appear on the reels in the same row. The activating Escobar icons will cluster and be chained together, and each symbol awards you a random coin win before the feature begins. You are initially awarded 3 free spins in which only Locked Up Escobar and Golden Briefcase symbols appear. When any of the appearing Escobar Locked Up symbols become part of a cluster, you are awarded a random multiplier of up to factor 10. Whenever a Golden Briefcase symbol becomes part of a cluster, you trigger the following additional features:

All winning combinations within the cluster are awarded a multiplier of x2 or x3.

Symbols that form the cluster are randomly awarded a bigger value for a bigger win.

The Golden Briefcase symbol gets a higher starting value for increased wins.

Every time a symbol connects to the cluster you are awarded spins will reset to 3 for more win chances in this feature.

In Free Spins mode you are awarded 10 free spin. Like in the Drive By feature, a hail of bullets lands on the reels, yet in Free Spins mode the bullets can transform any symbol into a Wild symbol. The Walking Wilds feature is also active during Free Spins. If there are any Wild symbols left on the screen after you have played your 10th Free Spins round, you get 1 extra spin. You will continue to get additional free spins until there are no Walking Wilds left on the reels.

The stated maximum win in the table can be awarded in Free Spins at the highest bet level with a maximum of coinciding wins.

During the Walking Wilds feature you can claim a maximum win of £400,800.

Narcos is another fantastic branded slot game, in which the game developer has toned down the violence in comparison to the series. Due to the use of drawings rather than photo imagery, the slot portrays a retro 1970s feel, displaying top notch imagery and graphics. Original features add to fast-paced action and increased slot game excitement. Free Spins is not that easy to trigger, so you need some patience and funds to get the opportunity to claim the game’s top rewards. As a medium to high volatility slot game, it might not quite satisfy players on either end of the volatility spectrum. Smaller players, who might prefer smaller wins on a more regular basis, might find that the slot eats too much into their bankroll without any wins. Lovers of high volatility slot could lament the slight lack of variance. Although it’s hard to please everyone, Narcos slot will have a wide appeal to fans of the series, lovers of action-packed high-quality slot games and players who like a pleasant middle ground in terms of slot game volatility.

Having created the world’s first online casino in 1994, Microgaming is one of the gambling… 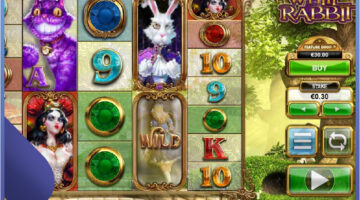 How to Win at Blackjack with 12 Useful Tips

Play Roulette for Fun and Free with No Sign Up