Have sugary sweet slot gaming fun with the Golden Chase 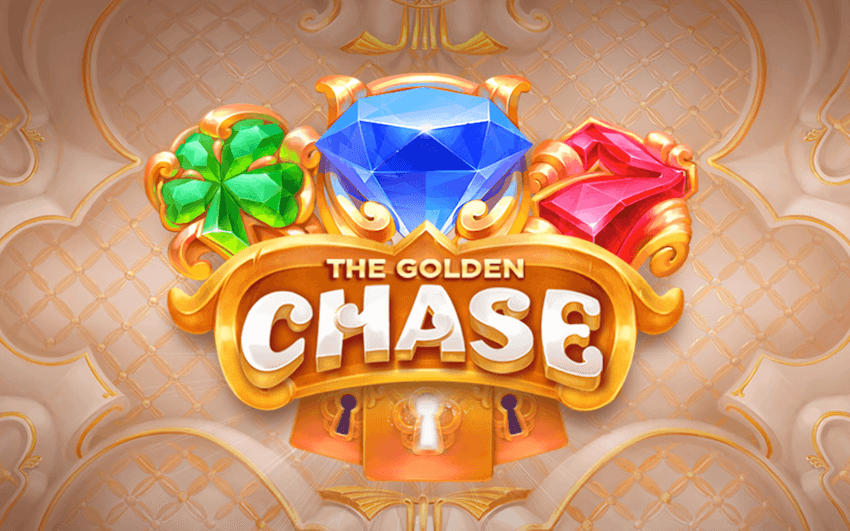 The Golden Chase combines elements of the classic slot game with a wealth-theme. The slot has been designed in peachy-pink colours giving the game a cute and soft feel. The classic fruit machine elements are reflected in the symbols that appear in the reels, as you can expect old school icons like bells, lucky number 7s and four-leaf clovers. In addition to these, you can find golden horse shoes and sparkling gemstones on the reels. The slot is accompanied by a cute, orchestral soundtrack to get you in the mood to make slot game riches in style.

The symbols on the reels appear on satin cushions and the grid has a golden frame to display a fluffy world of wealth. The symbol of the gemstone is the highest paying symbol awarding you 40 times your stake if you play 5-of-a-kind in one round. The game has a few remarkable features. The slot lets you unlock symbol positions for increased win ways and additional game features. The slot doesn’t have Scatter symbols and the Free Spins bonus round is activated by playing consecutive wins. Despite its soft and fluffy appearance, The Golden Chase slot game is a volatile game with great win potential of up to 6,600 times your stake.

This symbol is simple to identify and fulfils its usual symbol substituting duties for increased win chances.

Every winning spin awards you a re-spin which will unlock a symbol position on the top of each reel represented by a key lock. Every re-spin also increases the numbers of win ways. With the first re-spin the top position of reel 1 unlocks offering you 324 win ways. On the second, third and fourth re-spin the win ways increase to 432, 576 and 768 respectively. If you manage to initiate 5 consecutive re-spins, you trigger the Free Spins round and get to play with 1024 win ways. Each re-spin also gives you a golden feature.

With every win you also collect a Golden Feature for the Free Spins round. This feature can entail:

Free Spins mode is activated after 5 consecutive re-spins and awards you 8 free rounds. In this mode you play with the maximum of 1024 win ways and benefit from the Golden Features you have triggered in the activating rounds.

The Golden Chase has a cute appearance and due to its design in soft colours it might have been created to especially appeal to female players. The softness and cuteness can be deceiving however, and the slot has a high variance which can eat into your bankroll. This slot might for that reason not be that suitable to lower-risk and smaller players. The slot has a few features that are sufficiently original and are interesting ingredients for added excitement and win potential. If you are a high roller and/ or like high variance slot, whether you are male of female, you might be pretty keen on this slot that offers increasing win ways and good win potential to indeed make your chase for slot game riches golden.