The game Taboo is a new release by Endorphina a software developer is a five-reel slot game with a 25-payline. The game has a fifty shades of grey theme that helps keep the game interesting and thrilling to its players. The slot game also comes with 5 wheels and it also offers Triskele Wheel Bonus, Expanding Wilds, and Red Room Bonus. Players also get the opportunity to try their luck at the various bonus offers the game offers. The casino game taboo is a game worth playing for any online casino player who loves slot machines.

How is Casino Game Taboo played?

The first thing any player notices from the game is the interesting theme, the game Taboo contains. Apart from the theme, it also has premium symbols that represent the fifty shades of grey theme fully. Among the various symbols of the game include paddles, handcuff girls, whips, and among other symbols. The game’s low paying symbols consist of the letters B, S, D, and M. The game also has a wild symbol, which replaces all other symbols excluding the bonus symbol. The wild symbol available in the game makes it possible for players to build their paylines. 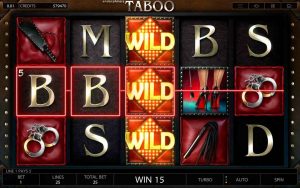 When a player manages to hit the wild symbol on the 2, 3 and 4 spins, the wild symbol expands over the whole wheel. When playing the casino game taboo it is important to remember that the scatter symbols present in the game do not require to be in the paylines to pay, as long as a player gets three or more symbols you are paid according to the game’s pay table. Another important aspect of the game is the bonus symbol. The bonus symbol only exists on three specific wheels. If you manage to hit wheels 3, 4, and 5, then you gain access to the Triskele Wheel Bonus.

Tips to master the game online

The one thing that makes a player successful when playing any game is their knowledge of the game. Having advance knowledge on the various available tips helps players navigate easily when playing Taboo. Players must have a trial play to help build their understanding and skill of the game. Playing a trial game offers players the opportunity to better understand the game.

The adventurous guy is back, but he is not in the Amazon – this time…

The goddesses of fire, water, air and earth have up to 5000x your stake in…

You must login in order to comment or rate a review.