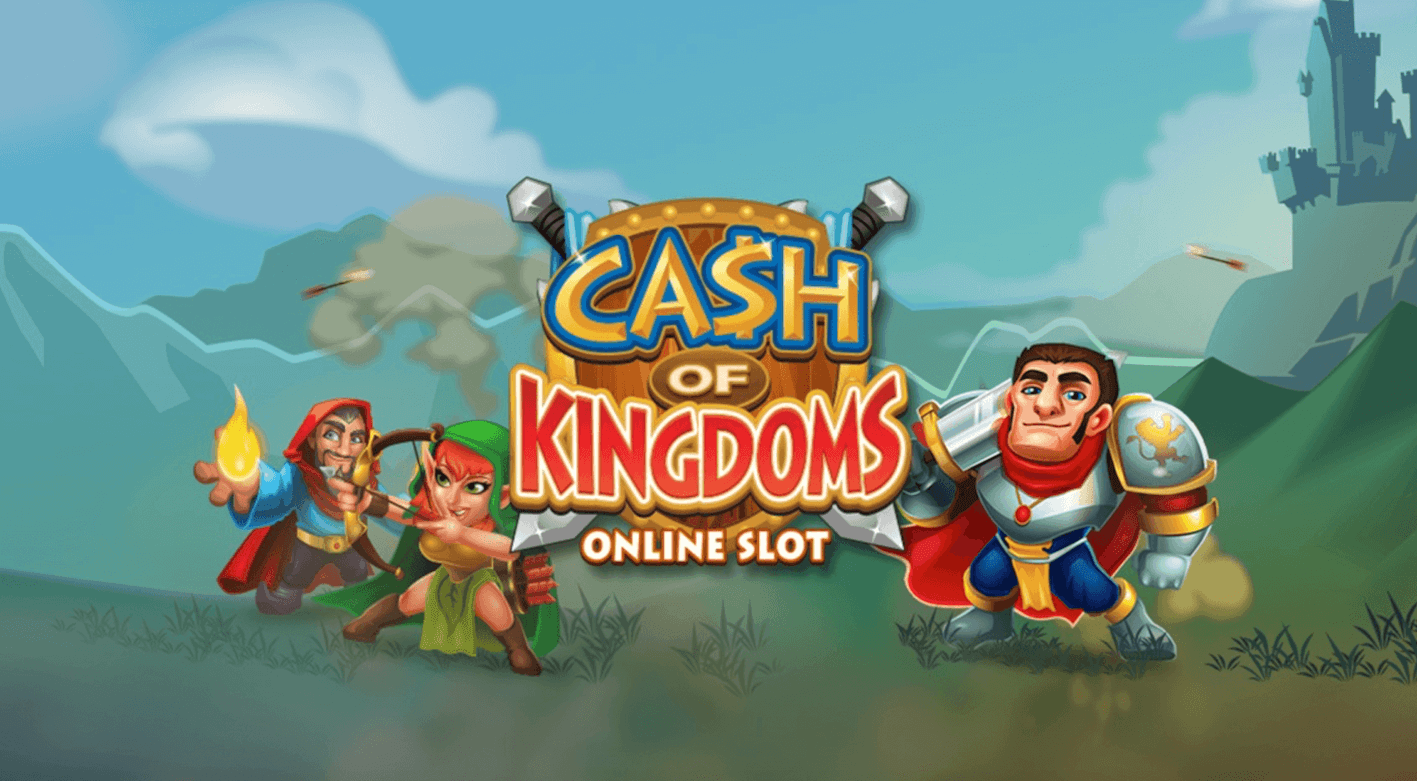 Dive into the treasure chests of medieval realms to be king or queen of riches in the playful and cartoon-like slot game Cash of Kingdoms.

Cash of Kingdoms feels like a slot version of a cartoon featuring five characters, who are the heroes of the story. The magical Mage, the noble Knight, the feisty Archer, the crafty Rogue, and the bearded Bombardier take you on an adventure through and imagery medieval realm where you can make some real winnings. While the Knight is the brains of the group, the Mage protects the band of heroes from evil forces. The Rogue knows how to take away the riches of the realms, while the Archers protects the group and the loot with her fiery archery. The Bombardier knows how to set off a bomb to clear the way for the great escape, so you claim some treasures.

In addition to the main characters and their attributes, you play images of bags of cash, barrels of gunpowder and treasure chests on the reels. The Knight is the highest paying symbol and when you play 5 of these on the reels in one spin you win 10x your bet.

The Wild symbol is a staple feature of any slot game and can help you form a winning combination as it can substituting any symbol with exception of the Scatter symbol. Cash of Kingdoms slot game gives its Wild symbol an extra edge by turning it into and Invading Wild. An Invading Wild functions as a duplicating wild and accompanied by swishing swords and flaming arrows, this feature can turn entire reels Wild. This means extra wins for you in the form of Multipliers. If you play a stack of Invading Wild symbols on reels 2 and 4 the middle reel as well as the outer reels can turn wild as well.

The symbol of the treasure chest functions as the Scatter symbol and if 3 of these appear on the reels in one round, you trigger the Free Spins game.

The Free Spins game is triggered when you play 3 Scatter symbols in one round. In this mode you win an extra Multiplier of x2 when you play a stack of Invading Wilds on reels 2 and 4 turning the middle reel wild as well. If you play another Scatter on the reels during a Free spin round, you are awarded another free spin. In Free Spins mode you can be awarded up to 20 free rounds.

As mentioned previously, Multipliers are awarded in both the main game as well in Free Spins mode when Invading Wilds turn adjacent reels wild as well giving you a multiplier of x2.

Cash of Kingdom slot has a fun and quirky theme and mainly provides its excitement through entertaining cartoons and wins that might be small but can hit frequently. This makes the slot very attractive for players, who prefer to place smaller bets. The excitement might end there, as the game doesn’t have a great amount of special features.

There is a maximum win of £100,000. This is higher than average for a non-progressive jackpot game, however with a maximum bet per round of no less than £435 per spin, this seems a rather bad deal for high rollers. With a maximum win of 230x your bet, the potential reward seems quite low in relation to the risk of the high maximum wager.

The Cash of Kingdom slot might also be less appealing to those who don’t fancy the cartoon-like graphics and prefer more sophisticated imagery.