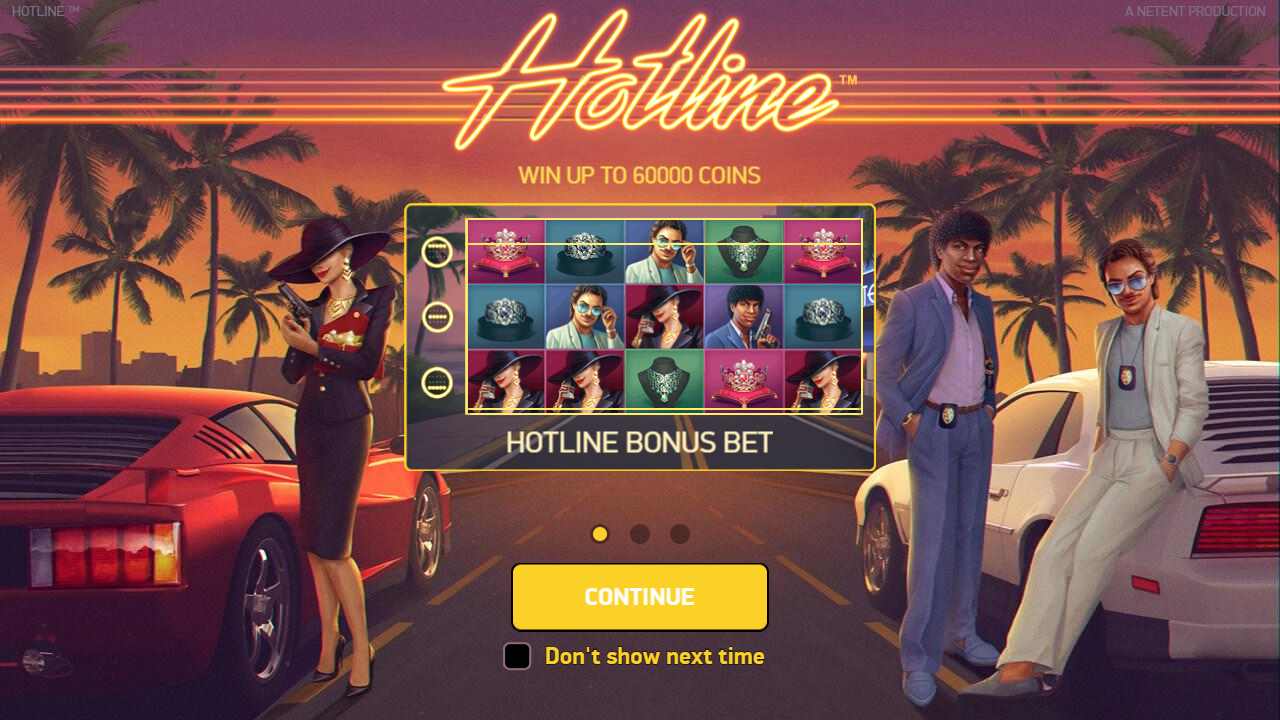 Hotline casino game is a new casino game that hit the market in late March. The game has a striking resemblance with the popular video game GTA Casino Vice City. Its introduction video captures the minds of any player. Quinn and Rivera, the detective protagonists, go out after Kitty Weiss who is responsible for a jewelry heist. The game is based on the car chase that ensues.

Smooth roads and palm trees along the roads lighten up the setting. These along with the Miami Beach embody the impressive animations and graphics used in the game. The game at some point mimics the retro style that gives it an 80’s feel. The clips within the game also cement this look.

The new casino game features re-spins, bonus bets, free spins rounds and wild substitutions. It involves a 5×3 grid structure. A reel is given to the player on one of the main streets. A return to player percentage is recorded throughout the course of the game. The bet limits of the game range from £0.15 to a maximum of £450 with a gamer being able to earn up to £2000 in a single bet.

You can earn a re-spin every time a wild symbol falls on an active hotline. The wild symbol will expand when this happens and the bet level as well as the coin value will be similar to those of the original spin. As the car chase intensifies hotline casino game offers you an opportunity to have free spins. 7 free spins are up for grabs whenever the scatter symbol lands on reels five, three and one. The money that you can win from this is incredible.

The adventurous players will be impressed by the bonus bet feature. This undeniably increases the likelihood of winning. A player can get a win from one of the 30 available pay lines. The highest earnings are represented by the villains while the jewelry symbols stand for the lowest earnings. A hotline which is represented by a row is activated when a bet of at least fifteen coins is placed by the player. The game allows you to place a double bet using thirty coins or a triple bet using forty five coins.

To win big, do not shy off from choosing three hotlines at a go. This triples your initial bet and increases the chances of having wilds all over the screen. Try to land on the wild symbol especially during the free spins. It will expand and spread throughout the reel.

The game can be played on a mobile device or on a tablet. Here you get the option of trying out a free trial before engaging in the real thing. Its HTML5 design also allows you to play it from your desktop browser. The online platform comes along with a great atmosphere. The modern soundtrack and 3D graphics affirm the class of hotline casino game. It also gives you the opportunity to play the game from any location of your convenience. The coins that are placed in a slot machine when playing offline are substituted by an online transfer deposit.